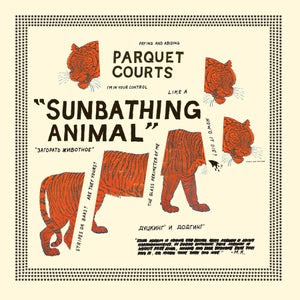 Every now and then some self-styled expert proclaims that rock and roll is dead, or on life support, and the question becomes "who is going to save rock and roll?"   To be clear, I don't subscribe to such gloom and doom notions and I don't suspect that regular readers of this blog subscribe to it either.  But to play along, if rock needed saving, what current group would you point to to revitalize the broad genre of rock?  I would guess you all have a thought, and because you are interested enough in pop music to be reading, I'll assume that your candidate is worthy and well considered.  However, in case you need a back up, or are willing to allow me to propose an alternative, take a listen to Parquet Courts and their June LP Sunbathing Animal.  Following on their well received Light Up Gold, this album continues the lads' adventure in noisy rock, with a few quieter interludes.  The album was released in June, and for some now forgotten reason I didn't listen to it.  I recently pulled it out and was thoroughly impressed.  For my ears there are clear similarities to both The Rolling Stones (when The Rolling Stones were The Rolling Stones rather than The Rolling Stones Touring Machine, Inc.) and The Clash.  Repeated listens gave me suggestions of Pavement, and maybe a bit of The Clean, The Kinks, and The Fall.  Good company, for sure, but also damn fine music.

There is volume, guitar noise, an aggressive rhythm section, and unapologetic vocals.  Of course there are ragged edges, but this is rock and roll.  And building on that statement, this isn't music that pretends to invent something.  It takes what it likes from its predecessors and interprets it.  No bells and whistles, and our experience is better for it.

The three tracks below provide a taste of the breadth of the listening experience, from the punk fury of the title track to the shambling folk rock of "Instant Disassembly" to The Clean-like "Pretty Machines".

Sunbathing Animal is out on Mom + Pop Music / What's Your Rupture.  If you like rock and roll, this is top ten stuff folks; don't sleep on it.