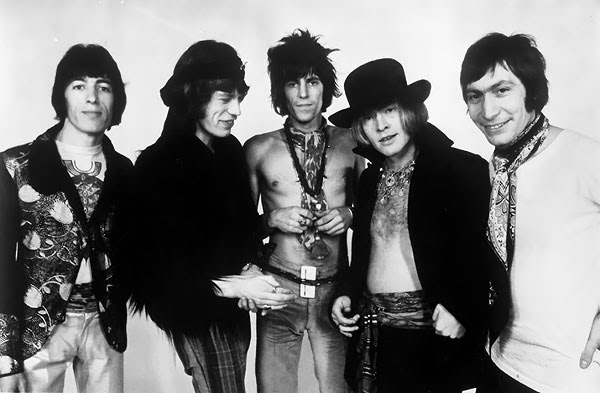 Perhaps the only positive thing that can be said about the Vietnam War was that the outrage and chaos around it created some great music. Mick Jagger was inspired to write "Street Fighting Man" in 1968 after witnessing a huge and intense anti-war protest in Grosvenor Square in London, where 86 were injured and 200 arrested.

"Street Fighting Man' is for good reason considered one of the Rolling Stones greatest achievements, a stunning and powerful piece of music that was the centerpiece of the great Beggars Banquet LP. Among its many strengths is its ambiguity, completing avoiding the trap of most political songs that leave nothing to the imagination. It seems to start as a call to action, the darker more violent cousin to Martha and the Vandellas "Dancing in the Streets": "Everywhere I hear the sound of marching, charging feet, boy / Cause summer's here and the time is right for fighting in the streets, boy".  But just a few lines later, resignation sets in, or is withdrawal, or pacificism, or cowardice?: "Well now what can a poor boy do, Except to sing for a rock & roll band? /  Cause in sleepy London Town there's just no place for a street fighting man, no."

The music is just as striking, the song just leaping out of the speakers, raw and powerful, despite the complete absence of any electric instruments except the bass. Keith Richards created the distorted guitar sound by recording layers of acoustic guitars through a mono cassette recorder. Meanwhile Charlie Watts is playing deliberately off-kilter rhythms on a very small, antique drum kit that came up in a suitcase, set up on top of the cassette recorder and miked up to sound extra loud. Add Brian Jones' sitar, Nicky Hopkin's piano (sounds especially cool in the outro) and Dave Mason playing Shehnai, an Indian double reed oboe, and you have one jarringly unique sound on par with the urgency taking place in the streets of most major cities in the Western world in 1968.

Okay enough of my yacking. "Get down":


The song is a staple of the Stones' live shows. And wow, are there are a great many live versions to chose from. But this one from 1972 is strong:


The song is greatly admired. Bruce Springsteen likes to cover it in his concerts and once said: "That one line, 'What can a poor boy do but sing in a rock and roll band?' is one of the greatest rock and roll lines of all time. ... [The song] has that edge-of-the-cliff thing when you hit it. And it's funny; it's got humor to it." But the best cover I came upon was by the Stones' little brothers, Oasis, audio version only, terrific:

46 years ago, as the Chicago Dem Convention was being held, this song was banned by a stations across the country because it was contributing to the violence. Quite the contrary. The most politicized of my friends thought it was a cop out by Jagger rather than a coll to action. I gave it a 98,