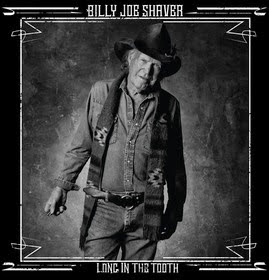 Billy Joe Shaver is a real treasure, and it's a good thing he keeps promises. Long In The Tooth is his first album in 7 years, and his best, I think, since 2001's The Earth Rolls On. The promise? Well, Shaver released a live album not long ago and appreciated the positive reception so much that he promised his next album would consist of all original songs. Shaver's songwriting is as good as country music gets, so this is a welcome development.

Shaver has often been known by the company he keeps, and this record is no exception: he's got Tony Joe White playing guitar, Leon Russell on piano, and sings a duet with old friend Willie Nelson. True to form, there's a little wink, one of those little turns of phrase that's so wryly true, it makes you wonder why nobody's written it before: "It's hard to be an outlaw/Who ain't wanted anymore":

The title cut is a silly but engaging song, Shaver's self-deprecating country-fried rap about being older and wiser, taking the good with the bad. And there is plenty of humor on the record, but as is usual with Shaver, there's more wisdom and pathos than you will find on country radio in a year's worth of listening. And we'd all be better off listening to Billy Joe Shaver more. He's at home in Nashville as much as Texas, but that's only because he knows the score and is willing to march to his own drummer. Check out "Music City USA":

Shaver calls this his best record ever. I'd say that's downplaying some of his earlier work, but he's right to be excited about how this one turned out. Every song crackles with his outlaw spirit and his ragged but upbeat vocals, the songwriting is some of his best, and the production and sequencing are excellent. Long In The Tooth is out now (Aug. 5) on Lightning Rod Records.

It’s really very informative that I wanted ever, thanks for this. best electric shaver