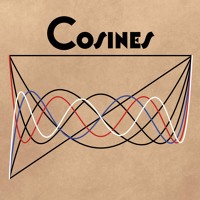 Cosines are a guitar and synth pop band from London, named after Carole King's doo wop group from the '60s and making quite a name for themselves at festivals and shows this year.  And based on their debut LP Oscillations, the buzz is well-deserved.  The songs are very engaging, with affecting emotion in the (mostly female) vocals, hummable melodies, hooks, and a very adept feel for dynamic changes over the course of the songs.  There are elements of the sweetness and fuzzy guitars of a straight indie pop group, but also clear currents of more forward-looking pop as well, as may be expected from a group that considers themselves 'math pop'.   Thematically, the album charts the chaos of young relationships, and I think it is about as good a soundtrack for that subject as I've heard in a while.  A few tracks below demonstrate the band's range and quality, but if you only have time for one, get lost in the wonder of "Our Ghosts".