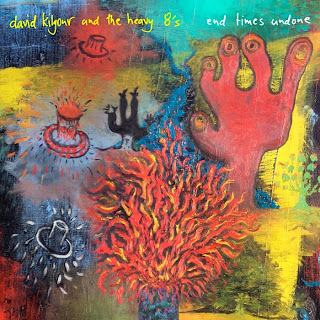 End Times Undone is the new album by The Clean co-founder David Kilgour & the Heavy Eights. We've gone on endless rants here at WYMA about Kilgour, his band, his guitar sound, The Clean and the Dunedin Sound. Merge Records released The Clean's Anthology recently (more about that soon from us at WYMA), and on the heels of that stellar collection comes a new release from Kilgour's current band. End Times Undone is certainly connected to the Clean's sound - how could it be otherwise? - but it carries its own set of joys even beyond that wonderful, hypnotic sound. As on the previous albums, The Heavy Eights are Taane Tokona on drums, Tony de Raad on guitar and keyboards, and Thomas Bell on bass and keyboards. David plays guitar and keyboards.

The album opener “Like Rain” is equal parts psych and jangle, as has been the case with the best of Kilgour's music. He's a visual artist as well, and to anyone who becomes immersed in the chromatic sound of this music, that won't be a surprise. Like his music, his art combines elements of the overwhelming beauty and mystery of the world, with the result that you are overwhelmed but completely unable to pull away. I'm speaking for myself, of course. Kilgour albums get stuck in the stereo, in the best way possible.

“Christopher Columbus”, another track we featured about a year ago when we first heard about the plans for this album, is perhaps the highlight of the album. It certainly features the best guitar playing on the record - a few country-sounding licks, plenty of subtle interplay between Kilgour and de Raad.

I think the best things about Kilgour's work are the melodies and the subtle changes. Neither are easy to do well, and in fact, Kilgour doesn't claim to have figured this out. He credits his muse - in fact, explicitly in the song "Comin' On", calling himself a "pagan punk hippie". And on this album, perhaps a little bit more than on previous ones, the punk influence is apparent in the noise level and barely-controlled chaos of songs like "Crow" and "Down the Tubes". But always, this music comes back to melody - and few do that better than Kilgour.

If you'd like to listen before you buy, check out the stream and a nice short interview with Kilgour at Wondering Sound.