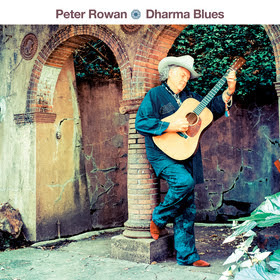 Peter Rowan is a roots music giant - as lead singer of Old And In The Way, his warm, straight country vocal approach was perhaps the single best thing about a group that also included Jerry Garcia on banjo, Vassar Clemens on fiddle and the transcendent David Grisman on mandolin. All that said, Rowan's singing was what always distinguished their versions of "Wild Horses" and the like. And Rowan originals like "Midnight Moonlight" and "Panama Red" were so right, they just seemed like songs cowboys must have brought home from the range. He always seemed wise, mature and mellow. And of course, so he is. On his latest album, Dharma Blues, Rowan is dusting off all his musical and creative tools and putting them to work in service of an album that is really, like the best of Rowan's work, unforgettable.

From the opening track, so much about this album just feels right. That a capella opening - just right. The transition into a full, rocking country band with a gracious pedal steel played by Dave Easley - just right. And Gillian Welch's vocals on several tracks here - absolutely just right.

Here is Welch accompanying Rowan on "Raven", a spiritual meditation based in part on Poe's poem. Rowan's been playing this live for years, but for this recording, his harmonies with Welch add a wonderful touch:

Throughout the album, Rowan deftly combines Eastern themes (both musical and spiritual) with his time-honored bluegrass and country chops and a California country-rock sound you'd expect from a teaming of Rowan and Jack Casady, whose work with Jefferson Airplane and Hot Tuna bring almost as much gravitas to this project as Rowan's history. Recorded in Los Angeles and New Orleans as well as Rowan's home base of Sausalito, Dharma Blues features twelve new Rowan songs. In addition to Casady, Welch and Easley's contributions, Jody Stetcher (David Bromberg, Jerry Jeff Walker) played banjo and tamboura. The tamboura is a key ingredient of the title track, and several others here.

The best thing about the record is that, far from being weighted with expectations and history, it soars with a pleasure and joy that's hard to describe, but easy to feel on the very first listen. In Rowan's words: “The doubts and resolutions of the spiritual journey are what drive Dharma Blues. May this music bring joy to all.” It is out now (released in June) on Omnivore Recordings.