Viva Voce - The Future Will Destroy You 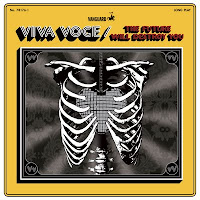 I might feel bad writing about yet another Portland band, but my Portland output doesn't come close to WYMA's coverage of the Seattle scene or Scotland pop bands. And there are great bands here in my town, including today's featured artist - Viva Voce.

Viva Voce are a husband-wife duo, Kevin and Anita Robinson, with quite a musically rich geographic history, starting in Muscle Shoals AL, moving to Nashville, then settling in Portland. They are far easier to enjoy listening to than writing about because they are stylistically difficult to pigeonhole, which is just one reason to love them.

Labels like psychedelic, indie pop, folk, soul, noisy, ethereal and more all get thrown at them and all fit at some point. Even though there are just two of them, they play so many different instruments, they are able to constantly change it up and let the sound serve the songs. While very careful in their craft, and deeply steeped in musical history, the Robinsons don't take themselves too seriously either. Their sheer joy in making music comes screaming through the recordings and live performances.

Viva Voce's latest release The Future Will Destroy You, is as good a place as any to start. Every song seems to have its own completely unique sound and style. I can't say enough about Anita Robinson's beautiful singing, which sets them apart from the standard guitar-drums noise rock duo. Her guitar sounds are wonderfully at odds with her harmonious voice - noisy, clangy, harsh then melodic.

The title track is one of my favorite songs of this year. Here's the studio version in a wacky video done by one of their friends:

And an older song "Octavio":

And if all this weren't enough, Mr. and Mrs. Robinson have another band, Blue Giant. One might be tempted to call them the full rock band, as there are 4 members and they do kick up a racket. But they are just as likely to go acoustic and play a gem like this (dig Anita's slide guitar work):