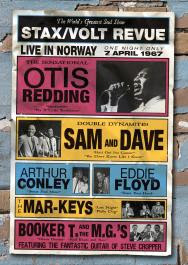 I don't usually get excited about concert DVDs. Typically, they don't provide the feel of a live show, and don't have the production quality of a video. Generally they remind me of watching fireworks through a darkly tinted window with earplugs blocking sound. However, there are exceptions, and a prime example of the exceptions is Stax/Volt Revue Live In Norway. Many believe this concert was one of the best multi-artist soul concerts ever delivered. What makes this DVD so special is the collection of top '60s Memphis R&B talent performing on the same stage in one evening. And this is talent that most of you did not, and never will, have a chance to see live.

In early 1967 the Memphis labels Stax and Volt sent top talent to Europe for a three week tour. The subject DVD captures the concert in Oslo, Norway on April 7, 1967, near the end of the tour. Original master tapes were used to render the 75 minute concert for the DVD.

The concert begins with the foundation--Booker T. and the M.G.s--performing "Red Beans And Rice" and their big hit, "Green Onion".


After Booker and company finish their solo portion of the concert, The Mar-Keys and their horns join Booker T. and the M.G.s on stage for three tunes. With the backing band now comprised of The Mar-Keys and the M.G.s, the vocalists take turns thrilling the crowd. First is Arthur Conley, followed by Eddie Floyd. Both of them are fine performers and their efforts are well worth your time. But the next two acts take the concert to a whole new level.

Sam and Dave were top performers and the DVD fittingly showcases five of their songs from the concert. As much as I like all of the other artists on the bill, Sam and Dave's set is my favorite of the concert.


The concert closes with five numbers from the great Otis Redding:

The DVD has been available since 2007, but I don't think it has received the recognition that it deserves.

I gotta pick this DVD up. Thanks for posting this.
Sincerely yours, The Soul Corner