Richard Buckner - Our Blood ... streaming on NPR ... out next Tuesday 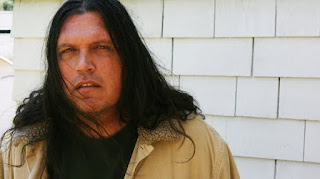 If you know Richard Buckner's music, you're as excited as I am about this release...

Here's the link to the NPR streaming site (which will probably be taken down after August 2)...

And here's a link to Buckner's website, with a tempting offer of a limited release bonus track, "Willow", if you preorder on iTunes.

On first listen, this is exactly what I'd hoped it would be and, like all previous Buckner records, so much more than I'd have reason to hope for. His voice, his guitar work and the arrangements are spare, haunting and absolutely beautiful. I can't think of anyone outside Neil Young who can use an acoustic guitar and his voice (with some hushed piano, slide guitar or synthesizer in places) to evoke this much feeling. For example, listen to the piano backdrop to "Collusion", and the overlay of piano, synthesizer and deep acoustic guitar behind his sparse vocals on "Thief".

Buckner will be touring with David Kilgour in the second half of August. Sounds like a great double bill to me... and these are already two of my favorite records of 2011.
Posted by John Hyland at 7/25/2011