The Tall Ships (San Diego, CA) - On Tariffs and Discovery 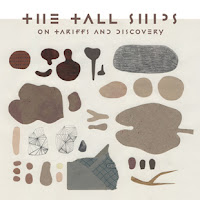 Love them or hate them, one thing the concentrated power of record labels seemed to do was keep multiple bands from getting to the stage of releasing an album while still having the same name as another band doing the same thing... well, things have changed. Sometimes I will hear something, make a note to myself to look the artist up, and that's that. Later when I have time, I'll look 'em up and see what I think. Here's a case where the band I heard has led me not only to their own good music (check the immediately preceding post featuring Tall Ships from Brighton, UK), but to another really good band, as well - these guys from San Diego, CA USA.

New to me, though it's been out since February. This is a San Diego band, a trio: Steve Kuhn on guitars and vocals, Kyle Conwell on bass, guitars and vocals and Keith Andrew on drums and percussion. I like their sound, reminds me a little bit of Pinback, Modest Mouse, and maybe Eleventh Dream Day... you can check out a song for yourself at their label site (link below). Good stuff, well worth your time.

Here's a video of them performing (rehearsing) "Freight Train Riders of America" which is on the album: