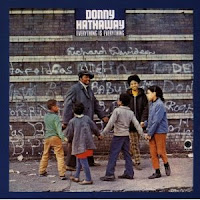 The 70's get a bad rap. Everyone gushes about the great 60's stuff from the British Invasion to soul to garage rock and on and on. The Summer of Love, can you dig it? Sure, yeah.

As one highly informed Soul Corner reader suggested his week, it's time to shine a spotlight on the late Donny Hathaway - extraordinary singer, composer, arranger, keyboardist. Not a lot of soul or rock songwriters cite Stravinsky and Debussy as influences as Hathaway did.

Hathaway is perhaps best known for his duets with college classmate Roberta Flack, including "Where is the Love."

Here's a live version of "Everything is Everything" that shows off his deep soul and musical chops:

And for his gut-wrenching emotional vocals, check out this live cover of the Leon Russell classic "Song for You":

As many of you know, this story did not end well. Hathaway's death in a New York City hotel in 1979 was ruled a suicide. It followed a lifetime struggle with severe depression. But he left behind great work and a powerful musical legacy.
Posted by Jim Desmond at 7/15/2011