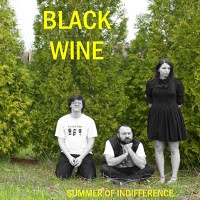 This is our fourth piece featuring a band on the New Jersey-based label Don Giovanni Records. I'd say that's overdoing it, if the stuff wasn't so good. Black Wine has a very interesting sound (really, a combination and overlap of sounds) On their Bandcamp page they use the label "psych punk", which works for me, and really, I'd say they cover all four P's in different places. The band consists of Jeffrey Schroeck, Miranda Taylor and Jason Nixon, and apparently all three write and sing. Listening to Summer of Indifference, I find myself veering from Minutemen to Creedence to Black Flag as, if not influences, analogues. And they all apply, in different places.

If you're looking for some punk rock that somehow combines hardcore tendencies with pop-punk catchiness over the course of nine fairly short songs (longest just under 4:00, five under 3:00), this is well worth checking out.

Here's "Through the Foam"... I really like this song a lot, and I think it gives a good sense of their sound, their talent and why they remind me of the Minutemen:

And here's "End of Days" so you can hear Taylor's vocals, too. Check out the drumming...you cannot have a good punk band without a great drummer:

The album was released in late June, they're on tour currently with Brick Mower: