Go check out The American Scene 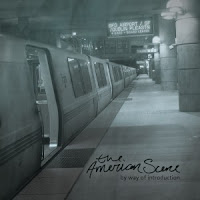 I have to admit I’m a sucker for a certain type of music that some people reflexively call ‘emo.’ At the same time, most of what we think of as archetypal emo drives me up the fooking wall. I don’t know, it may be some sort of defense mechanism, but there has to be something more than earnestness and vulnerability to get my interest. So I’m finding myself really liking a fairly new Berkeley band called The American Scene, wondering what it is that keeps me clicking on that sideways triangle, because it sounds a hell of a lot like, you know, what I was just talking about. Here’s a tune off their current EP, the 9 song “By Way of Introduction” (Pure Noise Records). See if you can figure it out. Dang, this is a lot of pressure.

Folks, that there is an excellent rock and roll song. I can’t resist loud sheets of guitar noise, and I really appreciate solid, not over-the-top vocals like this. It’s got a self-assured wistfulness to it, rather than a “holy-crap-if-she-doesn’t-come-back-to-me-by-god-I—will-torch-myself-like-that-monk-on-the-cover-of-that-rage-against-the-machine-album” that makes me reach for my Mclusky. Here’s another crunchy pop tune:

Bear Bryant once said, “Sure I’d like to beat Notre Dame, don’t get me wrong, but nothing matters more than beating that cow college on the other side of the state.” Although that has nothing to do with anything except to prompt me to point out that he never did beat Notre Dame, he also taught his players to “act like you’ve been there before.” And I guess the thing that sets The American Scene apart from the thousand other bands trying to do that sound is that these guys don’t seem to have to try too hard to be heard. It’s like they’ve been there before.