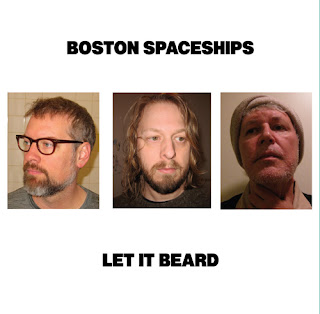 Sometimes, when considering Robert Pollard's recorded output, the word "sprawling" seems small. But let's start there... Let It Beard is big, real big. Kind of like the sound of a good '70's arena rock band, that big. Six listens through, and I still don't have a favorite song big... but the early candidate is certainly the four minute, sprawling (there's that word again, doing its best) "Tourist U.F.O." with its icing-on-the-cake J Mascis solo on the way out. "Hey, you got Mascis in my Pollard! No, you got Pollard in my Mascis!" But who's complaining?

Starting with the opener, "Blind 20-20", which changes at least four times in 3:03, this album is in fact a thrill ride and, as Pollard stated "a concept album about the sorry state of rock and roll"... the concept being, it would seem, "Let's quit screwing around with this precious crap and bring back the four P's". It's got all the ingredients of a great Pollard record: humorous double-take-inducing lyrical non-sequitirs, constant instrumental and tempo changes, razor-sharp guitars underpinned by a terrific rhythm section. Actually, in most cases it consists of Chris Slusarenko and John Moen underpinning, well, Chris Slusarenko, who does a great job both ways and is given credit for essentially pulling together the instrumental structure of the record. And please note well: Moen, who has played with Elliott Smith, Steven Malkmus and The Decemberists, is a hell of a rock drummer.

Other highlights include "I Took On the London Guys", featuring Steve Wynn on a very psychedelic-sounding lead guitar, "Make a Record for Lo-Life", which has a real Big Star swagger, "Let More Light in the House", which features a bit of prog art-rock - Soft Machine with banjos? Bob even sounds a little bit like Robert Wyatt to me on this one... "You Just Can't Tell" features some throbbing Colin Newman (Wire) punk guitar and "Chevy Marigold" will strike a chord with anyone who has a fancy for great blues-based rock music.

And to cover the Pop in the four P's, here's a nice ballad, "Christmas Girl", with a strong Pollard vocal and a sweet trumpet break :

Pollard's fifth release this year is his best, and that is taking nothing away from the previous four, the Lifeguards' Waving At the Astronauts, Mars Classroom's The New Theory Of Everything and Pollard's Space City Kicks and Lord of the Birdcage. He's certainly in the zone with five quality discs just a little over halfway through the year, not to mention wrapping up the GbV Classic Lineup Reunion Tour. Folks, let's hear it for the Iron Man McGinnity of rock and roll.

Slight correction... it's his fifth release this year. You left out Space City Kicks.

Of course you're right... thanks for he correction and I will leave both these comments in place so you will receive credit, albeit anonymously... Thanks for reading and for taking the time to write!

A Hair In Every Square is ... amazing.

(And probably the song that will turn off the casual fans.)

The only one I could do without is Speed Bumps.
It's this album's Big Time Wrestling.

"it just changed" is too funny, it implies your listening to the album as you type, which is totally likely and assumed. great album. my five are:

how do i prepare my brother for this release? i wonder to myself. what should i preface it with? or should i just hand him the cd and just nod accordingly? he's a big fan, but i get to everything first usually then i let him know . I dont know how to explain this one.