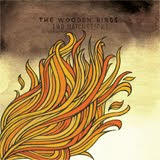 Former American Analog Set frontman Andrew Kenny has made his second full-length as leader of The Wooden Birds, Two Matchsticks. He never sang this much on American Analog records, but the vibe is fairly similar: surfy, understated guitar lines and easygoing song structure. Some of the songs are very catchy, some grow a little more slowly, but they're all well-done.

The first two tracks, "Folly Cub" and "Two Matchsticks" set the tone... chugging acoustic guitar over insistent percussion, and softly sung lyrics about being together and being alone, which is probably as close to a theme as the album comes:

Here's the video for "Two Matchsticks", recently premiered on IFC.com:

Kenny is joined on vocals by Matt Pond and Leslie Sisson, and they're a good match for one another and for this style of music. In the end, it's the guitars that carry the music, and in that sense, it's not far removed from Kenny's work with American Analog Set. Check out the guitar solo that starts at about 1:40 of "Company Time". It's a perfect encapsulation of what's going on here, and a perfect reason to enjoy this record.

They're on tour supporting the record, here are the balance of their tour dates: