In terms of geography, Brilliant Colors reside in neither Scotland nor New Zealand, but very roughly between the two in San Francisco. But musically the band seems to have one foot in the Creation Records/C-86 camp, and the other in the Blue Nun camp. The result on their new album, Again and Again, on Slumberland Records is jangly, noise pop bliss with a punch.

Brilliant Colors - 'Round Your Way from Slumberland Records on Vimeo.

Again and Again is a developmental step for the three ladies that comprise the band -- Jess, Diane and Michelle. The more punk stylings of their earlier album often are embellished here by engaging melodies, warm guitars and confessional, wistful songs, such as "How Much Younger".

However, the punkier, and darker, side edges back into the mix with songs like "Back to the Tricks", below, or "Painting Truths".

Again and Again eschews traveling a broad spectrum of influences and styles to provide a cohesive, even disciplined, set of perfect summer music. And its been on daily rotation on the Rocksteady74 players since summer arrived in Seattle (which was less than a week ago, unfortunately).

By the way, album track "Cult Face" reminds me of The Shop Assistants, and that is a foolproof tactic for getting my attention. 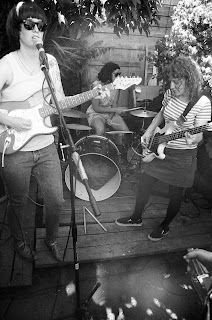