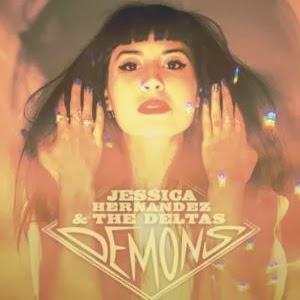 We've been waiting for Jessica Hernandez and the Deltas' debut for some time, since singing their praises here at WYMA earlier this year. And Demons was worth the wait.

The Detroit native, blessed with a powerful and instantly memorable voice, backed by a versatile ensemble of great young players from the Motor City, defies easy categorization. Her bio cites Tom Waits and Gogol Bordello, and she draws comparisons to Amy Winehouse. But at the core here is an undeniable Detroit soul and jazz sensibility, modern and original in sound, honed in the many gritty clubs that Jessica Hernandez and the Deltas played in their hometown for a couple years before touring the country this year.

All 5 songs here have careful arrangements, neo-soul underpinnings, great horns parts and funky danceable rhythms. But mostly what they have is Hernandez's spellbinding voice.  If her singing doesn't raise your BPMs, time to see a cardiologist.

Demons was released on Instant Records, founded and operated by Richard Gottehrer, who among many other things in his distinguished career, wrote "Hang on Sloopy", co-founded Sire Records, and produced everyone from Blondie and The Go-Gos to Richard Hell and Link Wray. Gottehrer has this to say about his latest musical discovery: "Every now and then a voice comes along that speaks directly to us through the music. I felt it the first time I heard Jessica and believe it’s only a matter of time until she touches us all."

Here's a live recording of "Caught Up", one of the tracks here:

Jump on this bandwagon now while there is still room.

Thanks for the tip.