REVIEW: Circus Devils - My Mind Has Seen The White Trick and When Machines Attack 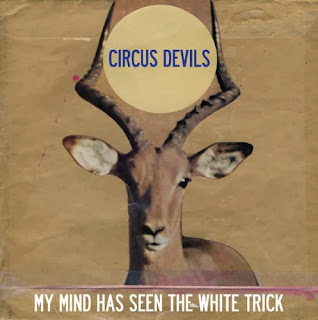 It's been two years since the last Circus Devils release, Capsized! so of course it's time for two albums in one day - 36 songs of Circus Devils hard/prog rock weirdness. Of all Robert Pollard's projects, Circus Devils seems to be where his hard rock muse spends the most time, but it's also the project with the most pure creativity. Evidence of the former - My Mind Has Seen The White Trick's "Deliver Ice Cream (You Must)" channels Motorhead in a delightful way, while "Mine" is a quieter track with some strange found sounds in the background, akin to something like "Ex-Supermodel" (to use a GbV reference, if that helps). And "Great Orphan" is just a big, strong ballad, proving that in no way are Circus Devils limited to bludgeoning you with hard rock or diverting you with strangeness. Sometimes in the same track, they transition from one to the other: "It Is Not Necessary" is a perfect example, where the hard stuff starts the track, then yields to the narrative, and both sides come together to close it out with a downright pleasant keyboard line behind it all. They are making delightful music on this record. In other words, Circus Devils are real. But, again, real strange. "Bird Zone":

The album features 19 tracks, and plenty of highlights - the electric piano on "Bird Zone", the guitars on "We'd Be Alright", the Captain Beefheart-inspired, unhinged weirdness of "Skyclops", and a sort of campfire singalong, "Eddie's Derangement" - love the acoustic guitar line in this one.

Obviously, a lot of the credit goes to his co-conspirator, Todd Tobias. And we've had evidence of Tobias' creativity apart from Pollard, too - we reviewed his album Medicine Show, and found many of the same strange and delightful characteristics that make Circus Devils' appeal so strong (and admittedly, to such a limited audience). 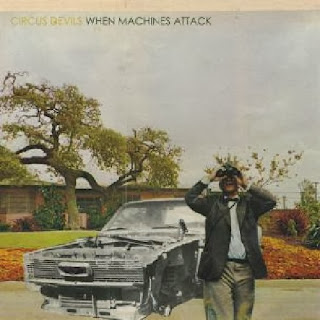 Along those lines, the second album, When Machines Attack, is the more "Circus Devils-y" of the two, featuring spoken word intro "Beyond the Sky" and a story line that seems to contemplate the uprising of our cars, perhaps in league with an alien race. The sheer terror in Pollard's voice in the next track as he intones the title "You're Not a Police Car" sets the tone. We would seem to be in line to be rescued (or attacked) by Bad Earthman, Craftwork Man (not Kraftwerk Man, though certainly there's plenty of krautrock influence all throughout the Devils' canon), Johnny Dart and Blood Dummies. Each song is a trip, and most of them are strange. Check out "We're Going Inside the Head of a Winner" - there is a nice Pollard ballad in there somewhere, but also plenty of strange effects and horror-movie elements:

The title track's an absolute keeper - it's one of the tracks that stands alone, even while serving as the pivotal track on this concept (?) album. And "Wizard Hat Lost in the Stars" is potentially that "all-time" Pollard ballad that will assume a spot on the never-ending playlist. It has echoes of "May We See the Hostage" from previous Devils record The Harold Pig Memorial, which is one of my favorite Devils tracks, or a GbV track like "Acorns and Orioles".

According to Sgt. Disco, the correspondent at the Circus Devils website, "The car is a metaphor here, in case that needed to be explained. The theme can be described as a trip into the present by way of the future. This is the opposite of a trip into the future by way of the present, something we all think we are familiar with." If you're willing to take the trip by listening to the album, this might make sense. Then again, it might not. But at least you'll have spent the time listening to a Circus Devils album, which is a good thing.

These records are out now (released 10/29) on Happy Jack Rock Records, and available at Rockathon and GBV Digital.

Great review. Big fan of the Circus Devils -- of all the post-'primary'/pre-reunion-era GBV Pollard stuff, Circus Devils is the one I buy most consistently. Will go out and grab these two very soon.