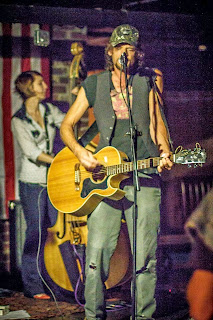 The so-called Research Triangle of Raleigh-Durham-Chapel Hill NC is known as a good locale to start a business. We might as well add Michael Rank Enterprises to the list.

Mermaids is Rank's second CD release of 2013, following on the heels of In The Weeds, which we reviewed here in March. And Rank plays live shows on a regular basis, hosts a weekly radio show (The Dust Hand Sessions), enlists the help of a dozen or more top local musicians to play on his CDs, recorded and mixed at 4 different NC studios. Full employment for all of Chapel Hill! (hey kids, don't forget to tip your bartenders).

Mermaids forms a trilogy of sorts with In The Weeds, and its 2012 predecessor KIN -- largely acoustic, rough hewn country music about heartbreak, rooted in a timeless Keith Richards/Gram Parsons aesthetic. The songs are personal in nature and Rank holds nothing back, working without any mask or artifice, making these songs strong and real.

Mermaids utilizes the strengths of two musicians in particular - the vocals of Emily Frantz (Mandolin Orange), many of the songs here being vocal duets, and fiddler John Teer (Chatham County Line). Frantz's voice is a beautiful instrument that is the perfect compliment to Rank's raspy drawl, like sweet vermouth to the bourbon.

Here's one of those duets from Rank and Frantz, plus Teer and co-conspirators, all fixing to break your heart on "Bound to Me":


One of my favorites here, "Bring Up You":


And the next time someone tries to tell you country rock is dead, point them to "Coming Hard", where Teer's fiddle work soars and the cut loose jam at the end is the perfect ragged but right:


I first met Rank 20+ years ago when his rock band Snatches of Pink ruled the scene in Chapel Hill, putting out a couple of great records and torching the Cat's Cradle in their rare appearances there. But Rank wasn't always the easiest guy to deal with, his attitude sometimes matching his vast talent. But time and life's experiences have made Rank a more generous and humble man, and he seems to appreciate the opportunity to make music. While many songwriters seem to have less to say as they get older, Rank is the opposite - the songs seem to be bursting out of him. He's making the most of his musical gifts, his access to great players, and a hard earned perspective on life and music. Mermaids represents Rank's continued maturation as a singer-songwriter.

We'll close with a video of "Shot of Gold":


Michael Rank is on a roll. You should check Mermaids out, you won't be disappointed.