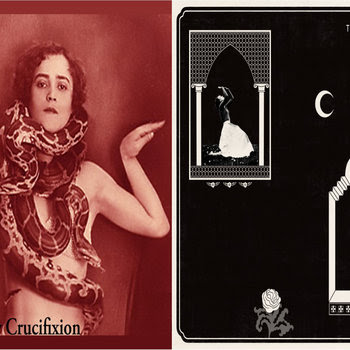 I've been waiting eagerly for this beauty.  It features six tracks by London's The Wharves and six tracks from one of my favorite emerging bands from Scotland, The Rosy Crucifixion.  The Wharves make enthralling, spiky, dark-tinged psychedelic folk rock.  And The Rosy Crucifixion?  Conjure Link Wray rockabilly with female vocals and a meaningful infusion of caffeine and moonshine.  The vinyl will be released by Soft Power Records on November 25, but interested fans are strongly urged to pre-order as only 250 copies will be pressed.

The Wharves have drawn comparisons to Smoke Fairies and Haight Ashbury, although I think they have more urgency.  Their sound is big, for a three-piece, and having three vocalists undoubtedly contributes to that effect.  The lyrics and atmosphere are dark, but the music is compelling.  The band is Mairon Andrau (drums), Gemma Fleet (bass), and Dearbhla Minogue (guitar).

One of the best tracks "Thick Syrup", with thick bass lines underneath the harmonized, almost chant-like vocals.

The Rosy Crucifixion is Emily (vocals and guitar), Stuart (bass) and Conal (drums).  Of all the active bands I cover, this one makes the list of the top ten I'd like to see live.  They induce the same excitement that I felt when I first heard the Jacob Yates and the Pearly Gate Lock Pickers a couple of years ago (interestingly, an album recorded at the Green Door studio founded by Emily and Stuart).  Named after the Henry Miller trilogy and influenced by The Monks, The Fabulous Wailers, Link Wray, Sister Rosetta Tharpe and others, their six-song set here represents the perfect combination of fun and evil.  Emily's guitar twangs and her voice, as was stated by a musician who knows her, sounds like Patsy Cline's evil sister.  Stuart and Conal set down a rhythm that could easily past muster in a 1950s east Arkansas roadhouse.


Here is a cover of Freddy and the Hitch Hikers' "Sinners" --


The band's own composition, the rocking "Hot In Your Head" --