A Quick Note: For various personal and professional reasons, none of them tragic or even really convincing, I've taken most of the year off from regular posting around these environs. Because a) I've heard a lot of excellent music this year; b) but doing full-on reviews of albums released in, say, March isn't very cool at all; c) I'm too lazy to do full-on reviews of all these albums anyway; and d) John has forgotten to disable my password to the site; I have decided to try to do a series of short notes about stuff I've heard in '013 that I really like.

So it would make some sense to start by recommending the brilliant July release by LA's Icarus Line, which is deep in the running for my album of the year. If you look for them online, music sites will genrefy them as "post-harcore" or some other such bullshit because no one seems to believe in the genre "purest distillate of rock and roll." At least anymore. Remember when fireman Sean Connery winked at that kid Kevin at the end of Time Bandits, and then Kevin turns around and sees that smoldering chunk of black concentrated evil in his parents' microwave? That's it right there -- The Icarus Line. The photo below was taken during one of the recording sessions for Slave Vows. 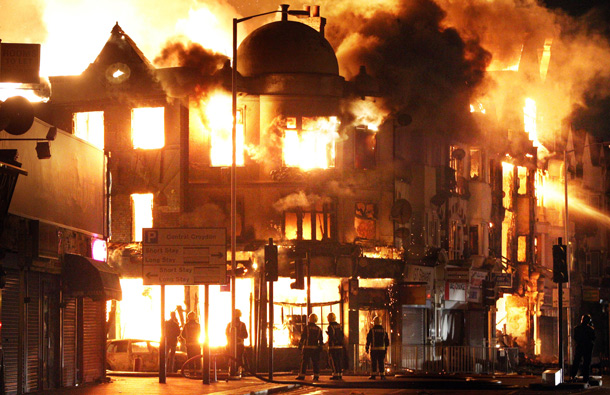 Frontman Joe Cardamone's lyrical themes haven't changed any since the band's 2004 classic Penance Soiree -- he can make Greg Dulli and Nick Cave seem Victorian by comparison. But what makes this record overpowering is the ritualistic sadism practiced upon the amplifiers. Shut the door and crank up the volume for the full effect of "Rat Ass":

The searing guitar is out front in the producer's mix on every song, and it makes for an incendiary experience -- at once deeply satisfying and unnerving. It doesn't get any more rock and roll than this.