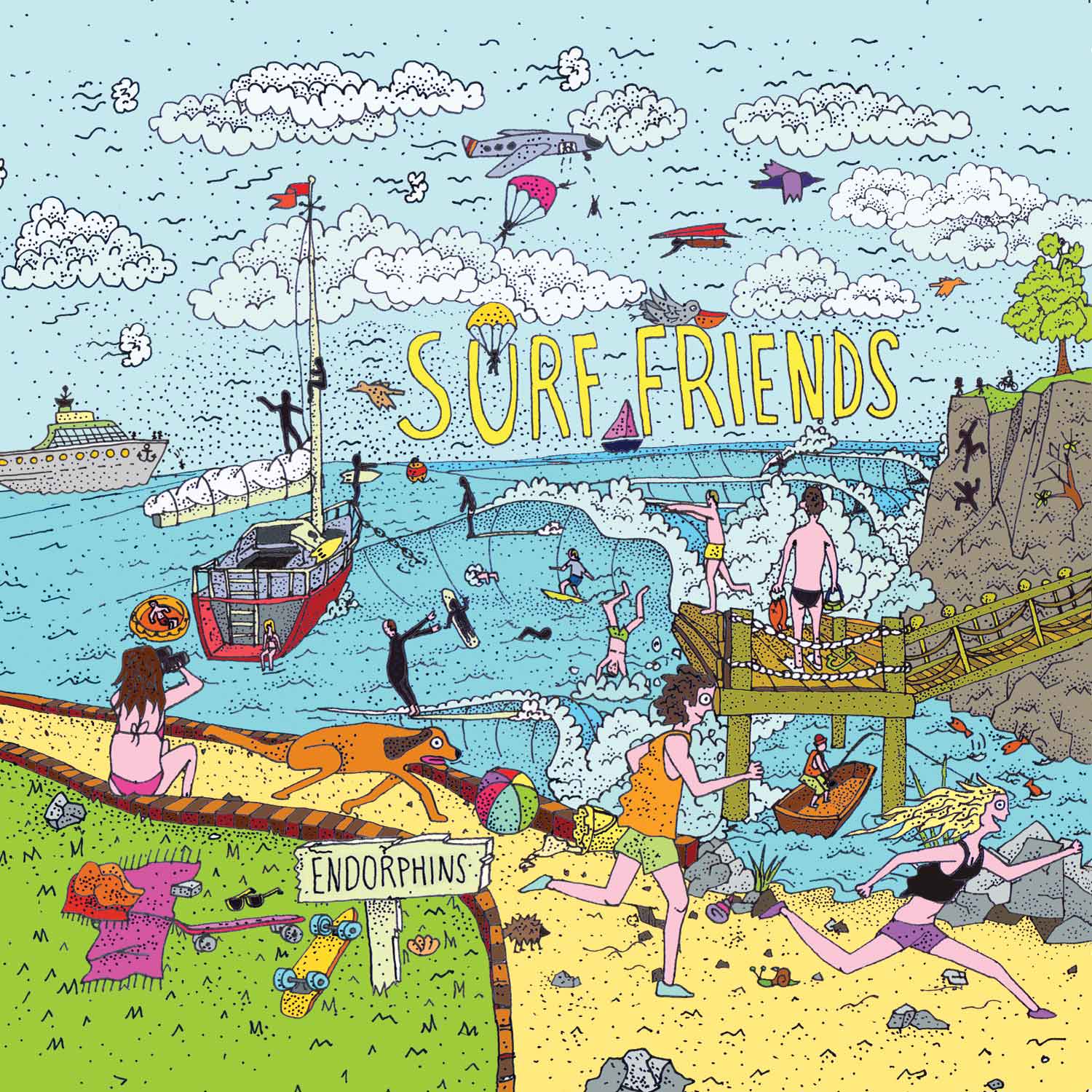 Sun-kissed but energetic surf rhythms, fuzzed out sonic backdrops, steady grooves and harmonized vocals are on the menu for Endorphins, the new LP from Surf Friends.  It is the band's second album, and their first for legendary New Zealand label Flying Nun.  The album is fun, adventuresome and very satisfying.  And if the music world is right and just, it should earn the band new fans on distant shores.

The album leads off with the soaring fuzz and laser shots of "The Sea".  It is a song high on the list of those that never fail to induce a smile when I hear them.  The Auckland duo inevitably will draw comparisons to fellow Kiwi bands The Clean and The Chills with the next following songs, "Chance" and "Breakin".  And to be fair, there is more than geography and stylistic similarities at work, as Endorphins features a few contributions from David Kilgour.  "Mexico" finds the band exploring a bit of surfy drone.  If the Beach Boys had a side project as a garage band, they'd be proud to turn out a track like "Summer".  The middle of the album, with "Moving On" and the glorious sprawl of "Clean Deers" is a bit more space rock, but still displays the fine bones of their New Zealand antecedents.  "The Sea Outside" and "Cool" manage to suggest influences from both The Bats and The Velvet Underground.  I think the former is a sleeper track that over time will emerge as one of the standouts from this album.  The album closes with "Yourself", a 8:22 interplay of guitars and choruses over thick bass foundation.

Surf Friends are Brad Coley and Peter Westmoreland, armed with guitars, keys, drum machines, bass and a twin vocal delivery.  For two guys, they have a full and varied sound, and the able production from Nick Roughan captures all of the energy and immediacy of the songs.  I imagine The Jesus and Mary Chain could have sounded this way with a dose of happy pills and a new found appreciation for surfing.  Ah, what could have been.  But let's not dwell in the past, let's look to the future.  The future is our friend.  Specifically, the future is Surf Friends.

Test drive Endorphins with "The Sea" and "Chance", below.  We've also included the fine video for "The Sea".

Endorphins is out now via Flying Nun, and is available in CD and digital formats.  International fans can check out the link for Flying Out, below.

I'm all for any video showing two guys just running like mad down the beach and jumping in the ocean. Killer guitar effects too.