Friday Nuggets: "I'm Waiting For The Man" - The Velvet Underground 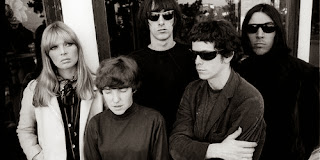 Lou Reed's death this week rocked the world. Certainly few if any artists had more influence over the garage rock that we cover weekly here with the Friday Nuggets offering, and throughout the year with most of the bands we feature here at When You Motor Away.

Hard to select only one Lou Reed song, but I'm hugely partial to "I'm Waiting for The Man", released in 1967 on The Velvet Underground and Nico, their landmark debut record.  It embodies the surface simplicity of '60's garage rock, especially with its pounding piano line.  But underneath, there's a tremendous amount going on that makes it one of Reed's most beloved songs and an all-time classic.

Here it is, film by Andy Warhol shot during the band's earliest rehearsals in 1966:

If you are wondering where the Stooges and then The Ramones got their tough and primitive sound, look no further than this song.

The word most associated with Lou Reed this week in the many fine articles written about him was "influential". But the word I would use is "unflinching". No musical artist of his stature was so fearless. He depicted life as he saw it, in the most stark terms, and musically, he was just as bold, defiant and frequently unsettling.

Reed was a journalism student and that kind of eye for details and the truth defined his writing.  "I'm Waiting for The Man" neither glamorizes drug use nor presents a cautionary tale. Lou Reed simply takes you with him to a drug buy in Harlem - the address, the number of flights of stairs, the exact cost ($26, not a rounded number), the clothes his seller was wearing (PR shoes and a big straw hat).  And most strikingly, he lets you listen to the conversation in the street and a glimpse into the clash of cultures when properly raised Jewish boys head up to Harlem to buy drugs:

Hey white boy, what you doing Uptown?
Hey white boy, you chasing our women around?
Oh pardon me sir, it's furthest from my mind.
I'm just looking for a dear dear friend of mine.

This is one of the greatest rock'n'roll songs that will ever be made.
Posted by Jim Desmond at 11/01/2013