REVIEW: The Mallard - Yes On Blood 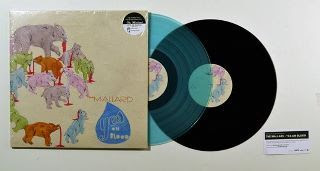 It is useful from time to time to reflect on why we do this. As a music fans, why do we write about music? Sure, there are the obvious financial and ancillary rewards incident to contributing award winning content [citation needed] to a blog read by thousands each day [statistics withheld on trade secrets grounds]. But the reasons go deeper than that. Quite simply, I continually find groups whose voices, in my opinion, deserve greater exposure. Since there is more music than any of us can find on our own, I want to give people a chance to hear what I hear. Today's ground zero for my mission is San Francisco's The Mallard. This trio plays their own brand of surfy, rootsy, tribal garage rock, and I get the feeling that they wouldn't change their approach to please anyone else (and three cheers for that!).

The Mallard has, at times, been Greer McGettrick's solo project, but it currently features Greer, Dylan Tidyman-Jones (drums) and Dylan Edrich (bass/guitar). They've featured on these pages last October and again this January. They are here again because they released their debut LP, Yes On Blood, last Tuesday on John Dwyer's (Thee Oh Sees) Castle Face Records. These former Fresno residents provide lots of guitar -- with plenty of feedback and delicious surf and 60s riffs -- a rubbery bass that isn't shy about leading the melody from time to time, and tribal drumming driving the train down the tracks. The female vocals sing verse and chorus, but sometimes just provide another percussive instrument. It is music that is fresh, unpredictable and utterly without artifice. Here is the delightfully (and in my case, accurately named) "I listen to Lyrics Last". If you were filming a '60s surf noir movie, this would be a must for your soundtrack.


My current favorite song on Yes On Blood is "Fog". It has an irresistible bass groove and showcases all that makes this band exciting. Greer has posted it so we can share it with you, and she generously made it available for download.


Take album track "Vines" for a spin. The beginning sounds like a Beat Happening song, but then transforms into a feedback drenched garage piece.


And for fun, here is a live version of another favorite of mine, "Mansion". It was filmed at the Columbia Theatre in Seattle in 2011.


From the '60s-spy-thriller "Intro" to the final note of the 11th track, Yes On Blood delivers one of the most captivating, expectation-warping musical rides you are going to find in this genre. I think that if 60s proto-punks (and Rocksteady74 favorites) The Monks, had envisioned having musical children, those children would be The Mallard. So, if you like surfy garage rock, this album should be the new number 1 on your shopping list. Number 2 on your list should be "don't forget to get number 1".