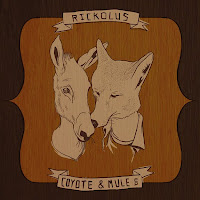 Rickolus is Richard Colado, and if you're not familiar with him and his work, I'm happy to introduce you. Homemade, self-produced (he played everything) and full of sonic variety, Coyote And Mule fits right into the tradition of one-man-band visionaries like Sparklehorse and Badly Drawn Boy. Like those two, Colado's got a genuine pop sensibility and real talent to go along with the wild creativity on display throughout his music. There's a sense in which this reminds me of music from Velvet Underground, Jonathan Richman and Syd Barrett, and on repeated listens, it's every bit as charming as my favorite music from the latter two.

My favorite song is "Candy Blood", mostly because of the kind of raggedly psychedelic electric guitar work, but everything on this record is well worth checking out. If you're into cassettes, you're in luck here because apparently he's releasing two different cassette versions with different sets of songs. With the variety and talent he's displaying on the songs I've had a chance to listen to, you would be well-served to get both.

Here's a video of him performing the title cut at a record store appearance:

One more thing - in searching for more of his music, I discovered some performances with a Radical Face. It rang a bell, so I searched our site and found this post from Hardy, posted in April 2011, about Radical Face (Ben Cooper)... two buddies from Jacksonville, Florida, both made it onto our little blog, about 10 months apart. What are the odds? Well, pretty good. Just like their music. Here they are, telling a story and singing a song.

You can listen, pre-order and starting on Tuesday February 14, purchase and download at the Circle Into Square Website.
Posted by John Hyland at 2/13/2012