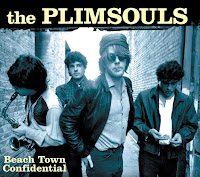 I'm generally not the world's biggest fan of live records. But this recently uncovered live recording of The Plimsouls from 1983, being released Tuesday, Feb 7, documents a great band at the top of its game. In fact, it now stands for me as their definitive work, an amazingly perfect recording.

Beach Town Confidential takes you right there to The Golden Bear music club in the surfer party town of Huntington Beach in LA, to see local heroes the Plimsouls. I'm sure the weather was perfect, the girls beautiful, the beer cold and free flowing. You can feel the energy surging as the set progresses, palpable excitement in the air, temperature rising.

Here is some footage from a live performance in Pasadena also in 1983, of the Plimsouls performing "Inch by Inch" and their big hit "A Million Miles Away":
Many of you may only know the Plimsouls from "A Million Miles Away", a perfect power pop song, but they had plenty of arguably equally great songs, many captured on Beach Town Confidential - "Magic Touch", "Zero Hour", "Oldest Story in the World", "Shaky City", "In This Town", and my personal favorite "How Long Will It Take?".

The Plimsouls, and their gifted songwriter and leader Peter Case, came out of the fertile LA punk scene. They brought that spirit and energy to a much broader range, drawing from the very best of the preceding 25 years of music - The Beatles, The Byrds, 60s garage, surf rock, and R&B. Their reach is reflected in the covers here: Bo Diddley ("You Can't Judge a Book"), Moby Grape ("Fall on You"), and one of my all times faves The Flamin Groovies' "Jumpin in the Night".

This release is so fresh and alive, hard to imagine it was nearly 30 years ago. It fits in remarkably well with a lot of the new stuff by very young bands that we write about here. If you don't know the Plimsouls but love power pop, you must check this out. And this is an absolute must have for even the casual Plimsouls fan.
Here's a second live clip of the Plimsouls from 1983, this time doing "Shaky City", a song included on this new live disc, and "I'll Get Lucky":

Peter Case and Paul Collins (Case's former partner in The Nerves, his band before the Plimsouls), are touring the country with a full rock band starting in March, playing songs from the Plimsouls, Nerves, The Beat and others. Not to be missed.

I'll leave you with two more from that same 1983 Pasadena show, "Oldest Story in the World" and "Everywhere at Once":
More info about Beach Town Confidential and the upcoming Peter Case tour dates here: http://www.ymlp.com/zWCSL2.
More about the record, and other Plimsouls reissues on Alive/Naturalsound Records here

great review. love the videos. but isn't it paul collins?

Of course it is. Embarrassing gaffe. But the beauty of blog writing is, you get to fix it. Back in my print media days, I'd have kicked my ass around the block for a month.
Thanks for reading Laurie.