REVIEW: Gabriel and the Hounds - Kiss Full Of Teeth 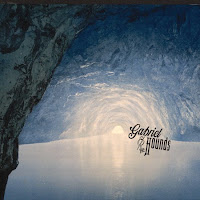 Out next week, Kiss Full of Teeth is a terrific, somewhat uncategorizable record by an artist with a lot to say, and no shortage of musically interesting ways to say it. Gabriel And The Hounds is Gabe Levine, the lead singer of Takka Takka (have to admit I was previously unfamiliar with them or him until hearing this record). On this record he's pulled together a pretty large group of musicians, including members of The National (at whose studio he also recorded some of this record). Sure, he's a singer/songwriter and this is a solo record, but there's a lot of rock in here, and layer upon layer of sound.

The first song, "The World Unfolds" is available for free download at Soundcloud - I love the strummed electric guitar and the guileless vocals, but am also entranced by the well-placed strings. I will be accused of hearing Pollard everywhere, but this reminds me of nothing so much as the more "orchestral" GbV - maybe some of the bigger-sounding cuts on Isolation Drills and Earthquake Glue. And if you know me, you know that's a big-time compliment. Another touchpoint? The "Sweet Jane" guitar riff is always a welcome addition.

Here's a short video, for "An Ending (Between Friends)":

Gabriel and the Hounds at Ernest Jenning Record Co.
Posted by John Hyland at 2/18/2012