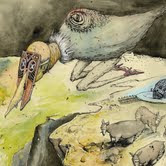 Liminal Phase is a Minneapolis band that plays with song structure and plays muscular rock, space jams, afrobeat rhythms and psychedelic, Zappa-style freakouts over the course of this album - sometimes in the same song. This strikes me as the type of record that musicians will really like, but if you are just a fan of well-played music with a variety of sounds and influences, you'll do yourself a favor to check out Adam Levy's band. Adam's better known as the leader of the Honeydogs, and this is clearly an outlet for his freakier impulses.

The record starts out with "Fanfare", which leads into an extended jam "Quantum Entanglement", then "And The Robots Made Love" (there will be a later song snippet called "And the Robots Made God" - yes, Electric Ladyland would certainly appear to be an artistic touchpoint). Then comes what, to me, is the album's highlight - a Fela-inspired "Mugabe's Blues".

Here they are performing "Quantum Entanglement" live in studio at The Current, on Minnesota Public Radio:

The Current is where I first heard Liminal Phase - on their song of the day podcast. Listen here:

Here's a video from 2009 - they're performing "Where's The Celery? (A Problem of Pattern Recognition":

You can stream the record at Spotify or Rhapsody, or read more about Liminal Phase at their website or their Facebook Page.

The record came out in November on Simon Recordings, but I just discovered it in January... better late than never.
Posted by John Hyland at 2/24/2012