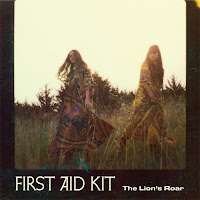 Scott recently featured this Swedish duo on his Midnight World Pop Scout, and since their new album is creating quite a buzz, we thought perhaps a full review/feature might be in order.

A bit of backstory, or perhaps you already know the backstory. No? Well, apparently these two sisters filmed a video of themselves performing blues standards in the forest, and thousands of YouTube hits later, they were international sensations. The legend grew - when they were playing a show at a small club in Nashville, word was sent to them that Jack White wanted to meet them and would like to record a song or two at his Third Man Studios. If you haven't heard it, here is the song "It Hurts Me, Too" - an old favorite and a nice recording:

What people are responding to in First Aid Kit, aside of course from their strong, clear voices, are reverence for and love of traditional folk music that seem to be universal. In the US, of course, we call it "country music" and we've done it every which way: down home with an acoustic guitar and a stark song of murder and betrayal, and uptown with horns and lush string sections backing crying songs of heartbreak and unrequited love - and everything in between.

So, these girls have apparently listened to all that, and along with producer Mike Mogis, who has produced some delightfully "throwback" records with M Ward, decided to throw a bit of all of it into their second album.

The thing I find most interesting about their journey to where they currently reside is that they came to Nashville and put together a truly rocking version of an old blues standard, then went to Omaha to make a record that, in a lot of ways, pays homage to the old Nashville "countrypolitan" sound.

But, in the end, it's the voices. They know that, as did White and as does Mogis. Listen to the yodel, the cry and the harmonies in "Emmylou". This is the single:

If you're looking for good country music and you don't mind it coming from another country, you'll find it here.