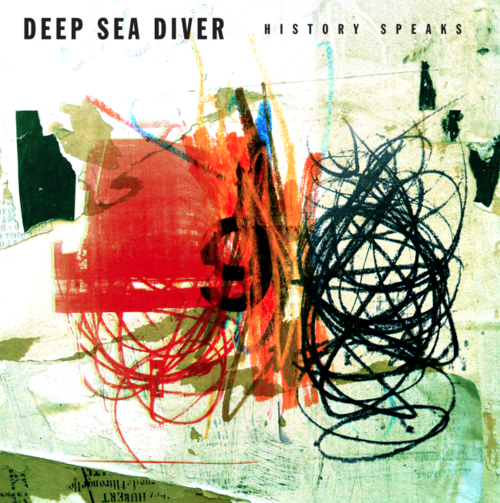 Sometimes talent takes a while to find its way and be recognized. Seattle singer songwriter and multi-instrumentalist Jessica Dobson had a major label contract when she was 18. But her two records with Atlantic didn't get traction, and she was on her own again. Given her talents, she has kept more than busy--she toured with the Yeah Yeah Yeahs playing keyboard and bass, and she plays guitar in Beck's touring band. She also is a guitarist for the Shins. However, she again is the front woman, this time for Deep Sea Diver. Begun in 2007 as a solo project, it now is a three-piece consisting of Dobson, her husband, Peter Mansen (drums), and John Raines (bass). Until now, the only recorded output of which I'm aware was a 2009 EP. Today Deep Sea Diver self-releases their debut LP, History Speaks, and if there is justice in the music world, the buzz will begin.

The nine tracks on History Speaks showcase the band' ability to produce both dense, melodic, up-tempo post-punk pop, and ballads with teeth. In terms of vocal delivery and instrumentation, the listener will note favorable similarities with PJ Harvey. The album showcases Dobson's excellent voice, as well as her work on the keys and guitar. But the rhythm section is a tight supporting unit, providing meaty grooves or gentle foundations as the song requires.

Here is the standout single, "You Go Running", which I believe is available for downloading. Dobson displays her guitar chops on this one.


Fine local blog, Sound on Sound, recorded the band playing two album track, "NWO" and "You Go Running", and posted the video on Vimeo. We thank our blogging brothers for their work. Enjoy a mini concert courtesy of Sound on Sound:

Deep Sea Diver: In Black & White from Sound on the Sound on Vimeo.

In my view, History Speaks is an impressive debut from a promising band. Download "You Go Running" and consider giving them some support. If you like "You Go Running", visit their Bandcamp site below for digital downloads. And in any case, make a note of them. I'm confident they'll be on our radar again.

Interesting. I thought she decided in the last year or so to quit making music under the "Deep Sea Diver" moniker and use her own own name instead. Regardless, I'm happy to see her releasing another record. The "New Caves" EP was great.

Matt, I'd read the same thing in researching for the post. I'm not aware of the reason for reversing her decision. Especially as there is a potential fight over the name with a group in Europe.