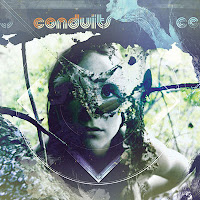 Omaha band Conduits describes itself as "Moody Atmospheric Shoegazey Drone". I can see that, but I'm going to add "Prog" (always looking to include at least one of the four P's) and especially I'm going to emphasize that these labels are perhaps descriptive, but in no way define the limits, of their music. The first song, "Top Of The Hill", starts out like Swervedriver, but just a little more wavery and with a fantastic female lead vocal. At 3:59, it's about the shortest song on the record.

It gives way to some more expansive songs with art-rock tendencies, like "Misery Train", and some songs that stretch out and even boogie. Seriously, there doesn't seem to be anything this group isn't capable of. "Fish Mountain" is an 8-plus minute epic of postpunk guitar rock and an excellent example of the variety of sounds - crescendos of bass, drums and keyboards backing raging guitars, plus Robert Plant-worthy wails - found on this record. The 5:58 "Last Dirge"? Moody and atmospheric, for sure.

Video for "Limbs and Leaves":

This album is due out March 20 on Team Love Records. The band consists of J.J. Idt - Guitar, Nate Mickish - Guitar, Mike Overfield - Bass, Keys, Roger L. Lewis - Drums, Jenna Morrison - Vocals, and Patrick Newbery - Synth, Keys. This is a terrific record, very well put together and sequenced. I'm impressed with the talent, chops and especially the power of this band. 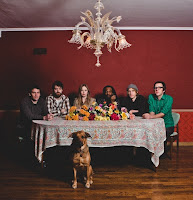 They're going on tour with Cursive and Cymbals Eat Guitars starting in March. Check their website or Facebook for more information.

You can preorder the record at Team Love Shop.
Posted by John Hyland at 1/26/2012