REVIEW: Various Artists - Where Is Parker Griggs?, Compilation from Alive/Naturalsound Records,out this week... 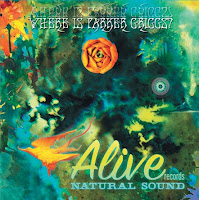 Radio Moscow's The Great Escape Of Leslie Magnafuzz was one of the coolest things I heard in 2011 - Parker Griggs' crazy hard rock guitar is terrific.

Apparently the 2011 incarnation of Radio Moscow disintegrated onstage just the other night, with Parker Griggs being taken to the hospital to sew up his head after he and his drummer threw an electric guitar back and forth in anger. With a new rhythm section, Griggs is continuing the tour. Your guess as to how long this incarnation will last - judging by the comments on the YouTube video of the incident, Griggs ain't the easiest guy to work with.

Radio Moscow is on the label Alive/Naturalsound Records, from which came some of our favorite discoveries of 2011... and they just keep coming. Here's a previously unreleased Radio Moscow track "The Stranger":

Here's a previously unreleased track from labelmates Lee Bains III And The Glory Fires - which is available on the Alive/Naturalsound label compilation Where Is Parker Griggs? A full length from Bains is due out in April - more on that when we get to hear it, but hopes are high.

Pretty good soul music-- and on this label (and compilation) are acts ranging from heavy rockers Radio Moscow, Welsh blues punk duo Henry's Funeral Shoe, Detroit punk rockers Gardens, and California punk screamers The Bloody Hollies (all reviewed on WYMA in 2011), not to mention Bains, the retro- Crazy Horse-meets-Jack Bruce stylings of The Buffalo Killers, Texas garage/beach/soul from Hacienda, and the Howling Wolf-inspired stomp and growl of The Black Diamond Heavies. Enough variety and quality to keep you tapping your feet, shaking your butt and/or banging your head for days... really. Most of the tracks on this compilation are exclusive to this record, but give a good sense of the various artists' body of work.

This is a terrific compilation. I am mighty impressed with the quality of every band I've heard on here, and everything we've gotten from Patrick Boissel's label. Going back a ways, it was the original label for the Black Keys (The Big Come-Up) and the first time I heard of it was fellow WYMABlogger Hardy's ardent recommendation for the Bloody Hollies.