Get to Know: Strawberry Whiplash 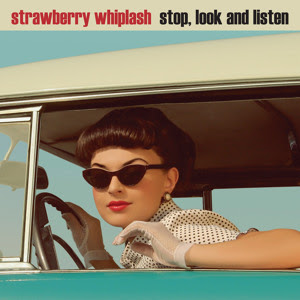 As regular readers know, I'm very much drawn to jangly guitar pop. In one of my early 2011 posts, I profiled Bubblegum Lemonade, the project of Glasgow musician Laz (Lawrence) McCluskey. Last summer I learned that Laz also belongs to a duo called Strawberry Whiplash with a vocalist named Sandra. Laz and Sandra have released a few fine noise pop recordings over the past several year. However, they are on our radar today because they are about to release a new three-track single on California label Matinee Recordings. Here is title track "Stop, Look and Listen" --
Stop, Look And Listen by Strawberry Whiplash

I should point out for those unfamiliar with Laz's Bubblegum Lemonade output, that there is nothing wrong with Laz's vocals. However, I think that joining with Sandra allows Laz to focus on on the fuzz, reverb and jangle that he does so well, and takes the music up a level.

In The Blink Of An Eye by Strawberry Whiplash