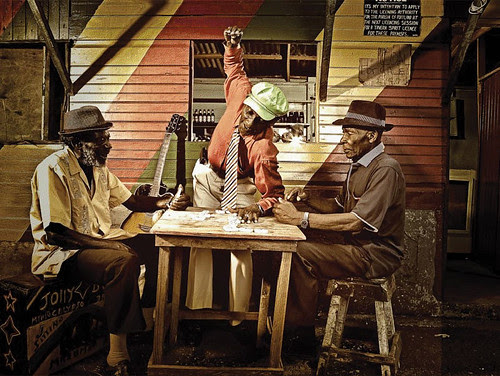 Covers of other artists' works are tricky. While the covering artist most certainly thinks that they are providing an honorable tribute or interesting interpretation, there always is the risk of leaving the listener disappointed and aching to cleanse his ears by pressing play on the original work. So I was understandably wary of The Great Expectation, an entire album of covers by Jamaica's The Jolly Boys. Sure, the cover of Winehouse's "Rehab" that I posted last week was great fun, but could they make an entire album of covers interesting? The answer, is a resounding "yes". They tackle songs by Lou Reed, The Clash, Iggy Pop, The Rolling Stones, The Stranglers, Johnny Cash and others, and make them their own. The listener forgets about the originals, and gets lost in the Caribbean rhythm party. Listen to the group's version of "The Passenger" while we provide some background.


The Jolly Boys are from Port Antonio, Jamaica. The band was formed in the mid 1950s and enjoyed success over the next four decades among reggae and world music fans. Their style of music is known as mento, which preceded ska and reggae on the island, and fuses elements of jump blues and New Orleans R&B. While sometimes referred to as calypso, it is its own distinct genre. Despite their ages (lead vocalist Albert Minott is 72), The Jolly Boys currently are the house band at the GeeJam hotel in Port Antonio. The Great Expectation uses the traditional mento instruments -- banjo, acoustic guitar and rhumba box -- and adds digital beats to beef up the sound for the group's interpretation of rock standards. By the way, the album was released in 2010, but I only recently became aware of it. If you like to get outside the rock/pop comfort zone, this is a recommended listen.

Here the band tackles Cash and the Stones:

For those who may have missed it last week, here is the fine video for one of the best songs on the album, "Rehab":

RS, this is terrific. An excellent find. Thanks.
Is Albert related to Sugar or is that a common name?

JD, I'm not aware of any close familial relationship between Albert and Sugar.