Margot and the Nuclear So and So's: "Prozac Rock" from upcoming Rot Gut, Domestic 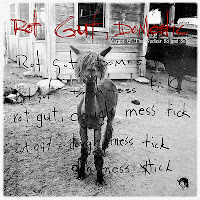 Margot & The Nuclear So and So's is new to me, but I'll be checking out some more of their music. First thing: there's no Margot. Members are:

Second thing, it's some pretty good punk. Third thing, they're from Chicago or Indianapolis, depending I suppose on the day of the week.

I recently received a link to "Prozac Rock", the first single off their upcoming album Rot Gut, Domestic, which will be released 3/20 on their own Mariel Recording Company:

You can buy it on iTunes and Amazon and a limited edition 7-inch is available in the band's webstore.