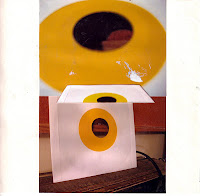 Hey guys! Robert Pollard's got a new record out, and it's great!

It seems like I start about 80% of my posts that way, but in reality, it's probably closer to half. But of course, it's frequently true. Having released six strong rock records in 2011, Pollard - this time, with his GbV Classic Lineup mates - has put together an excellent collection of songs to kick off 2012. On the one hand, it's about what you'd expect - the four P's (pop, punk, prog and psych) are in abundance. On the other, it's far from a rehash... it feels very fresh to me.

"Laundry And Lasers" kicks off the record with a slice of krautrock-style synth leading into a strong Pollard vocal -- and at about 1:02, the rhythm section and guitars kick into gear and it's Classic GbV... no doubt about it. The fake British accent is front and center. "The Head" is a short, lo-fi rocker, and song three is the previously-released "Doughnut For A Snowman" - just a beautiful pop song with wistful vocals and strings, leading into some nice harmonies. "Spiderfighter" is a Tobin Sprout vocal, starting with an Eastern-influenced first half -- just the thing to jump into after a perfect pop song like "Doughnut", but finishing up with a pretty solo piano and Sprout vocal, bringing back fond memories of Sprout contributions like "To Remake The Young Flyer". The GbV reunion is full of great stories, and one of my favorites is this piece from a local Michigan paper about Sprout's "secret past".

"Hang Mr. Kite" is a nod to Bob's Beatle roots. As with so many of his best songs, it is in the vein of a great pop or rock artist but with the Pollard touch. "God Loves Us" ventures a bit more into the punk side of the Four P's, then "Who Invented The Sun" is another Sprout vocal with piano - a delightful 1:21 of spare beauty.

Other highlights to me: "Waves", a super-catchy Sprout pop rocker, "Chocolate Boy", a short, beautiful pure pop gem, "Either Nelson" ("I challenge you to rock", shouts Bob) and the closer "The Unsinkable Fats Domino." Just in case you haven't already seen it, here's a video of them performing "Domino" on the Letterman show, complete with Demos' striped white pants, an onstage fall... only thing missing is the cooler.

Here's a link to my earlier post, containing links to download a couple of the songs on the record.
Posted by John Hyland at 1/09/2012