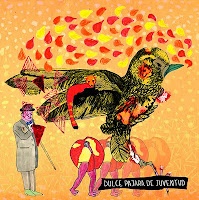 Dulce Pájara de Juventud (Sweet Bird of Youth) is a four-man band from Barcelona. I'm not surprised to discover that the band's members have been friends since kindergarten, after listening all the way through several times. The record has the kind of sprawl, freedom and emotional content that can't be faked or thrown together. The rhythm section is very strong and supports some amazing guitar work - in fact, as I listened, the words "Dinosaur Jr. en Espanol" kept coming to mind. But that's just part of the joy of this record. Like J Mascis' work, the understated vocals and easygoing but spectacular guitar work...

Here's a video I found on Youtube from one of their gigs. Tell me this doesn't look like a fun live act to see:

And as proficient and rocking as this band is, they're clearly having a great time... there's a lot of really fun music on this record. "Nacer 3" is a raging instrumental reminiscent of the Pixies with "vocals" just a spoken word recording of, in the band's words "A Mad South American Preacher". "Junior vs Death" is a pop/punk masterpiece with a shouted chorus, a bouncing bassline and a punk backbeat... try to sit still while you're listening. You won't be able to.

Here's a video for "It's Like Disappear", one of their earlier, acoustic songs.

English, Spanish, in any language... I can't stop listening to this record and expect it to be in the rotation for quite a while.

Listen or buy at Soundcloud:

And here's the website for their label, Dulce Pájara de Juventud at BCore Disc.
Posted by John Hyland at 1/29/2012

John, did you host these guys for an in-house?