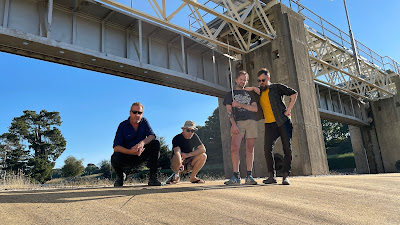 In this ultra connected world we all need to know where to find a power supply. To our surprise, we now have a new one -- the Australian quartet known as Power Supply. The band's line-up defines 'power', consisting of Mikey Young (Eddy Current Suppression Ring/Total Control/The Green Child), Leon Stackpole (Sailors/Ooga Boogas), Richard Stanley (Onyas/Drug Sweat), and Per Bystrum (Exhaustion/Voice Imitator[Ooga Boogas). At least one project on the resume of each member has featured on these pages in the past, which is a pretty damn fine endorsement of quality in our obviously un-humble opinion. Power Supply will release their debut album titled In The Time Of The Sabre Tooth Tiger on October 22 via Anti Fade in Oz and Goner Records in the rest of the world.

But I digress -- the original point of this post is to bring you the lead single for the album. You can test drive it yourself, but this song is all we need to know that this album is a 'must have'.