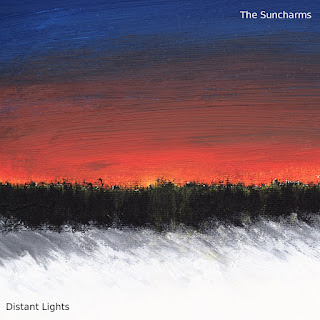 The Suncharms produced a small number of short-form releases in the '90s, and then dropped off the music radar. They re-emerged midway through the last decade via a retrospective album. But thanks to Chicago's Sunday Records, the Sheffield, UK indie pop band now has released a debut album. Titled Distant Lights, it is a delightful collection of dreamy indie pop tunes with plenty of jangle, fuzz and hooks, and a somewhat shoegazey vibe. It references '90s British guitar pop, but doesn't seem at all out of place in today's indie pop world. Listen, and you, like us, will be happy that The Suncharms didn't give up on making a debut full length.

The main man of The Suncharms is Marcus Palmer. Distant Lights is out now in digital and CD formats. A vinyl version may be available later this year.