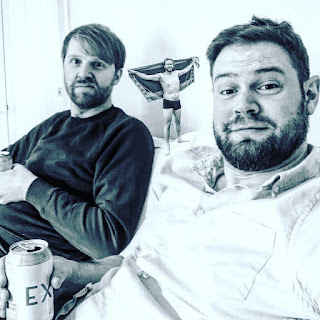 Rural France may seem an odd name for a UK indie rock band. It could be that when Tom Brown and Rob Fawkes decamped London for the more pastoral Wiltshire in 2017 the culture shock may have made the new home seem more like a move to rural France. However, despite the name, the music the duo create has more kinship with Teenage Fanclub and Guided By Voices than the French countryside. And, of course, that makes them a perfect fit for a blog named after a GBV song, like us.

Today brings the good news that Rural France has a new album coming out this autumn. Titled RF, it consists of 11 tracks recorded in true lo-fi fashion in Rob's garage. "Stolen Beer" is the first single, and it suggests that this new album will be a worthy successor to their fun debut Two Drink Maximum (link). Buzzing guitars, big drums, spirited vocals, wry humor and terrific melodies -- a perfect menu!

RF will be out October 29 via Meritorio Records.