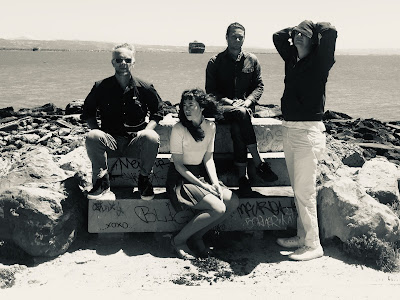 San Francisco band Cindy makes dreampop that I don't want to live without. This isn't sunshine and lovers making puppy dog eyes at each other dreampop. But it is beautiful and, in an understated manner, packs a devastating punch. We have already featured two recent singles, "Be True" (feature here) and "Lost Dog" (feature here), and today share a third, "Party Store". All of the singles are taken from the band's upcoming third LP, 1:2.

Cindy's music is centered around the compositions of vocalist/guitarist Karina Gill. The other members of the band are Jesse Jackson (bass), Simon Phillips (drums), and Aaron Diko (keys). The songs are of moods, feelings and scenes, depicted in snatches more often than full narratives. The effect is a bit like slipping in and out of daydreams. The arrangements underscore the compositional approach with unhurried tempos and sparse instrumentation. The result is a beautiful musical haze with an unsettling dark streak.

The video for "Party Store" was made by two stalwarts of the San Francisco indie music scene. Kevin Linn of Paisley Shirt Records directed the video and Mike Ramos of Tony Jay shot the video. Mike also forms the other half of the duo Flowertown with Cindy's Karina Gill.