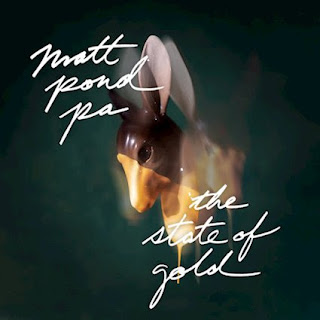 The music on The State of Gold has had a bit of a journey. Originally released in 2015, its creators Matt Pond PA and the label then began to wrestle for control of the material. After a five year negotiation, the band was able to get the rights to the masters. They reworked the remastered and re-sequenced the material and now have presented it again to the world. The obvious questions are 1. was it worth the trouble, and 2. should the reissued album deserve your attention.

It seems to me that the first question is for the band to answer, but given their effort that answer appears to be "yes". As for the second question, in my view the answer is a resounding "yes". The album sizzles and pops with energy and confidence, sparkles with great performances complemented by smooth and dynamic production, and showcases the work of an top level pop songwriter and lyricist. Of course, artists tend to change over the years and Matt Pond PA of 2021 has fewer loose threads and gritty edges than Matt Pond PA of two decades ago. But Matt's knack for a killer melody remains and the more robust production updates his style to good effect. Dive in -- this edition of The State of Gold is an album you will be happy to own.

The State of Gold is out now via 131 Records, which is the band's own label.