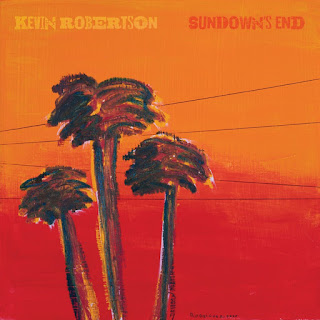 As regular readers of this blog know, if an album is billed as jangle pop, power pop, psychedelic, and '60s guitar pop, we are going to pay attention. And in the case of Sundown's End, by Aberdeen, Scotland's Kevin Robertson, the album is what it is advertised to be. It also is packed with sweet melodies, sharp hooks and several months' worth of good vibes (that would be the summer months, of course). Kev was already in our books because of our past coverage of The Vapour Trails, a fine Aberdeen band of which he is a founding member (link to our feature). But we were unaware of his side project under his own name.

We are unaware no more, and we are very impressed. Yes, there is plenty of delicious jangle pop. There is dusty, country rock such as "Settle Down", and gentle ballads such as "See How We Love". "Telepathic Minds" could be found on a collection of  '60s garage/psych nuggets, and closing track "Yesterday's Rain" could have a Byrds byline. The harmonies lift the spirits and the melodies make us smile. This is a treasure of good vibes.

Sundown's End is out now as a digital release via Subjangle Records (there were limited edition CDs, as well, but they have been snapped up).