REVIEW: PUJOL - United States of Being 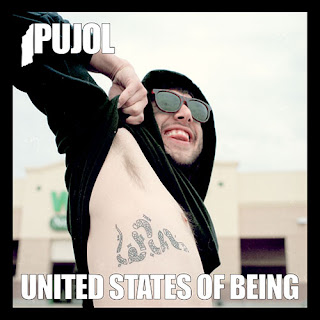 A relatively recent favorite here at When You Motor Away is Nashville rock band PUJOL. Following up on last year's EP Nasty, Brutish and Short (WYMA link here), they've delivered a terrific debut album, United States of Being.

Daniel Pujol, the leader of this band, is one of the hardest-working musicians in Nashville and has a well-deserved reputation for delivering quality, albeit down-and-dirty, rock music. It's tempting to just call it "garage" and that label certainly applies to the opener, a very fuzzy number named "DIY2K" with shouted vocals over a wonderfully ragged guitar riff... And the second song, "Providence", builds on both the theme and the musicianship, adding a pounding piano line and some nice harmony vocals on the chorus. Here's "Providence":

But it's not all fuzz and pounding, there are a variety of sounds on this record. There's some riff-based, almost "album rock" sounding stuff in the middle - "Keeper of Atlantis" and "Made of Money" feature guitar riffs and piano lines that wouldn't have been out of place on, say Kiss or Skynyrd records. Then, an acoustic song, "Endless Mike", but eventually it's back to what I would call the signature sound (and the sound that makes me want to hear more from this band): "Reverse Vampire".

Here's the official video for "Black Rabbit", which was previously released as part of the EP:

Here is the 7-song set from the release show PUJOL played in Nashville on June 5:

The record is out now on Saddle Creek Records. PUJOL played Bonnaroo in Daniel's hometown of Tullahoma, Tennessee - so the buzz machine is probably already in high gear. And it's well-deserved.
Posted by John Hyland at 6/17/2012