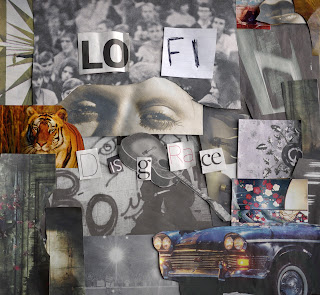 As I understand it, Larry Reid and his fellow Cinematics had left their Glasgow homes to live and record a third album in Berlin.  Instead, the band broke up and Larry was left in Berlin, working as a DJ, and without a band.  He started writing material for an album, informed by the isolation and loneliness inherent in being far from home, without his band, and not speaking German.  Apparently he considered scrapping the project at various points, but he eventually became persuaded that recording and releasing it was the right approach.  Good decision, Larry.  Good decision.

Recorded and released under the name Laurence and the Slab Boys, Lo-Fi Disgrace is a noisy, fuzz and feeback-laden brand of dream pop, with a few hard edges musically and plenty of hard-edged emotions lyrically.  For me, it is one of the brooding highlights of the year so far.  There is no major label involved, so it is the album Larry and his collaborators wanted to make, made to please them and not some A&R guy's image of what would sell.

Perhaps the best introduction for the reader is the second track, "Mushroom", which is the first single from the album. Here is a live version.


One of the most distinctive features of Lo-Fi Disgrace is the vocal performance of Reid.  While his vocals are soft, and not overly-emphasized in the mix, they command the proceedings by virtue his raw, baritone delivery (reminding this listener of Ian Curtis and, at times, Peter Murphy) and emotional content.  For me, his best vocal performance is in the third track, a story of dying love for which Reid's underplayed delivery beautifully underscores the hopelessness of the dying relationship, and highlights the key phrase "I would not do for diamonds, what you have done for free".  Apparently the song also gives name to the album, through the lyric "you killed it in haste, like some lo-fi disgrace".  Here is Do For Diamonds --


LoFi Disgrace includes tracks with upbeat melodies as well.  In particular, "Space Dream #2" and the track provided below, "Ballroom Killers", could feature on the dance floor.  And "K.E.O." is a swaggering delight.

The album was recorded in Berlin and Manchester.   The label is Grumpy Records.  In addition to Reid, the band includes Josh Brady, Matt Smithson and Lee Walsh.  The group takes its name from a trilogy of plays written by Scottish playwright John Byrne and set in Paisley, the town in which Reid was born.