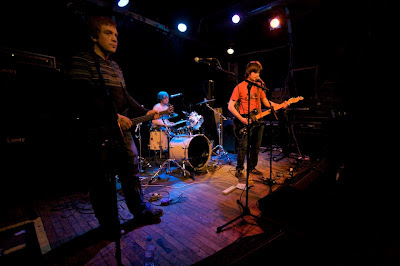 Min Diesel is a Scottish band playing an affecting take on indie rock. They have just released their second EP, a four-song affair called Mínage à Twa. There's plenty of guitar, plenty of feedback on the guitar, and a strong rhythm section driving the thing. And the vocals? Let's just call them a slightly off-kilter cross between Roddy Woomble (Idlewild) and the younger Kurt Cobain. I'm not saying these guys are Idlewild, or Nirvana... they're a pretty new band, so who knows where they might end up? But they sure do play with a lot of energy and they hit the mark quite often. I really like this record, and look forward to more from them.

Quoting from their self-description: Min Diesel... shamelessly plunder the best bits from their favourite late-80s/early-90s punk, lofi and math-rock bands' back-catalogues to create music they've taken great amusement from dubbing "min-die rock". Well, sure, why not? That's kind of a good description of the music - shameless, brash and amusing. I recommend this highly.

And here's the earlier EP, available via Bandcamp at name-your-price: