REVIEW: The dBs "Falling Off the Sky" 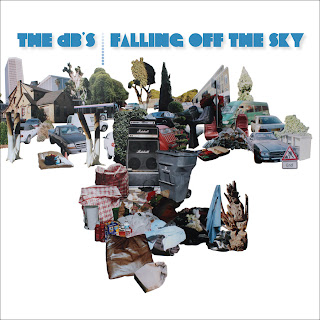 Second, as rock bands get older, experienced and technically very sound, the music may achieve some degree of mastery but more often than not it loses feel and energy. These late career rock records rarely have much magic to them. Being instinctive is a powerful element in rock'n'roll, while self-consciousness can suck the life out of of a song. It's a fine line - a band getting better isn't always better.

But somehow the dBs pulled off the high wire act. Falling Off the Sky is the dBs at their very best - tuneful, creative, energetic, surprising, tight, and yes masterful.

This project brings back the original lineup that existed only from 1977-1982, four boyhood friends from Winston-Salem North Carolina: singer-guitarists Peter Holsapple and Chris Stamey, backed by Gene Holder on bass and Will Rigby on drums.

While they never found commercial success, they were a pivotal power pop band in the burgeoning American DIY scene and inspired the bands that followed after them - R.E.M., the Replacements, Jayhawks, etc., and across the ocean, U2 and Teenage Fanclub cite them as a big influence.  They were the American equivalent of XTC and Squeeze, a highly skilled and influential left-of center band with pop hooks, jangly guitars, and great ideas galore.

Stamey left in 1982 to pursue a solo career, while the dBs, led by Holsapple, carried on until 1988, touring relentlessly and making some quality new dBs music. As a producer, Stamey played a pivotal role in the development of many younger artists, including fellow North Carolinians Ryan Adams and Tift Merritt, and in the current day with WYMA favorite The Parson Red Heads. After the dBs hung it up, Holsapple was a touring member of both R.E.M. and Hootie and the Blowfish, while making some very good music of his own especially with the Continental Drifters.

This reunion wasn't driven by million dollar offers to headline Lollapallooza or place a new song in Men in Black 3. You can hear in every track that this was old friends coming back to the musical chemistry that brought them together in the first place.  But most importantly, they came with new ideas and a sense of artistic urgency, rather than being out to take a stroll down nostalgia lane.

On Falling Off the Sky, Stamey and Holsapple's again demonstrate the incredibly complimentary styles that made Stands for Decibels (1981) and Repercussion (1982) such classics. It is tempting to cast Holsaapple as the garage rock / power pop / Southern blued-eyed soul man, and Stamey as more art rock avatar, Big Star meets Tom Verlaine / Television.  But both of them are versatile and master songwriters who do all those things and much more, every single one of the 12 songs here standing on its own, with variety and depth, skill and passion.

The CD kicks off literally with a wake up call: Holsapple's "That Time is Gone", a pure blast of rock'n'roll adrenaline, confidently announcing: Sure it's been 30 years, but we're back and ready to bring the rock - "You'd better wake up, wake up, wake up!"

Here's an amateur film of a recent live version at SXSW:


Next up is Stamey's "Before We Were Born", a gorgeous and catchy love song. Listen Here:
http://www.bar-none.com/downloads.php

Throughout Falling Off the Sky, Stamey's vocals are remarkably strong and emotionally touching. Not many rock singers are better in their late '50s than they were in their 20's, but Stamey's impeccable phrasing and tone throughout this record are outstanding.

The CD has many many high points and not a single clunker. My favorites - from Holsapple, the New Orleans flavored "Wonder Of Love", a catchy power pop tune "World to Cry", and two beautiful soulful ballads "I Didn't Mean to Say That" and "She Won't Drive in the Rain Anymore", the latter a pure slice of Americana pop, the type of Holsapple song that has long been such an inspiration to R.E.M., Ryan Adams and so many songwriters. And from Stamey -- a truly perfect pop song "Send Me Something Real" and the wistful and nostalgic closer "Remember (Falling Off the Sky)" with a very cool gradually increased tempo that brings the CD to a dramatic close.

"Send Me Something Real" should serve as a manual for aspiring pop songwriters - well balanced verse / chorus structure, great hooks, big fat guitar sounds, excellent production with effective use of strings, a couple well constructed bridges, and a pull-you-right-in opening and a satisfying dramatic finish. Truly kids, this is how you do it.

And did we mention how great a rock drummer Will Rigby is? He pushes it here throughout with a toughness that pulls all the parts together.

The year is nearly half over and Falling Off the Sky assumes the lead position as my best CD of 2012.


Falling Off the Sky will be released by Bar/None Records on June 12.

You can listen to the entire CD here: http://kdhx.org/music/music-news/hear-and-now-stream-the-new-album-falling-off-the-sky-by-the-dbs

Excellent stuff, JD. I'm glad to have these guys back.

Thanks for the comprehensive and insightful review. I do have one quibble...Peter Holsapple was not the "leader" of the Continental Drifters. The band functioned as an artistic collaboration between equals. Peter wrote and sang lead on several songs per album, played keyboards etc and did a lot of production work but I don't think anyone, especially Peter, considered him the leader of the band.

Tom L, thanks, point taken. It wasn't intended as slight to anyone else in the collective.