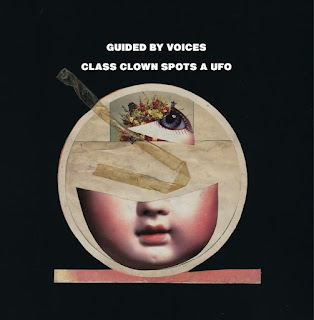 By now, it is surely no surprise to learn that Robert Pollard and the recently-reunited Guided by Voices have another sprawling, 20+ song rock album ready for release. After all, it's been six months since the last one! Class Clown Spots A UFO, out Tuesday June 5, is another result of 2011's GbV Classic Lineup Reunion Tour and the recording sessions that grew out of that reunion. Nor is it a surprise that this is one of the best rock releases of 2012.

Lead track "He Rises! (Our Union Bellboy)" is a guitar-driven track in the very recognizable GbV style - chiming electric guitar is well-featured, backing a typically strong Pollard vocal, and the pop/punk are the two P's in evidence. But the next track, "Blue Babbleships Bay", has some real Circus Devils moves - which is my way of saying it's 1:18 of bracing 70's prog-rock, an element that's always been present in Pollard's music, whatever the lineup. After all, Pollard has always included all four P's (prog, pop, punk and psych), and this is not any different.

"Forever Until It Breaks" is the first Tobin Sprout vocal, and is a pretty song - acoustic guitar and keyboards predominate, as you'd expect. "Class Clown Spots a UFO", the title track, is just spectacular. It's as if Bob set out to write a song whose catchiness would never be topped...

Check out this delightful blog post from No Ugly Babies, regarding the evolution of "Class Clown" - it's no surprise that the longer Pollard works on a song, the better it gets.

"Hang Up And Try Again" starts out with a ripping lead guitar line, a la "Little Lines", but with some vocal twists and a very strong bass line that ends up driving the song, before it dissolves into laughter. But "Keep It In Motion" is a melodic pop gem that showcases Pollard's and Sprout's wonderful way with a vocal, on top of some dreamlike acoustic guitar and keyboard sounds... and then it abruptly gives way to the wonderful, sprawling psychedelic electric guitar epic "Tyson's High School."

It goes on like this. My head spins as I listen to songs that are sure to become favorites - the 46-second "Roll of The Dice", for example. Who the hell can write a 46-second song that will get stuck in someone's head? Or another Toby vocal, "Starfire" - which reminds you of the heights these guys can hit together as it sails skyward, impossibly becoming more beautiful and lighter as it goes along. And the previously-released "Jon the Croc", more heavy psychedelia:

And "Hang Up And Try Again", which leans heavy and prog, with a bass line that reminds you of why one of this band's most-beloved covers is a Who song:

Some of the songs, like "Fly Baby", "Be Impeccable", and "Lost In Space" are glorified demos, the latter leading abruptly into album closer "No Transmission", which is a straight-ahead rocker. The whole thing, despite the vastness of the musical cornucopia here, leaves me eagerly anticipating the next release in this series - The Bears For Lunch, due out in November.

Out Tuesday on Rockathon Records or via GBV Digital.
Posted by John Hyland at 6/03/2012