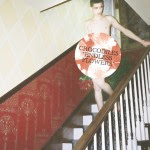 On their new album Endless Flowers, San Diego's Crocodiles are really hitting their punk/psych stride. This album is full of gems that remind of the Smiths, Ramones, Jesus and Mary Chain, My Bloody Valentine and forebears like The Beach Boys (with considerably more muscle and noise, obviously).

They have released a couple of advance singles, but trust me, every song on this record could be a single. Dark, noisy, catchy and joyous - the guitars are cranked up, the punk backbeat on the drums is revved up, and the vocal harmonies are almost overwhelming, they're so good. In fact, to me, the key to this record is the way all the sound comes very near to being out of control... but, except for the meandering, strange "Hung Up On A Flower", they pull off the feat of being simultaneously very, very tight and yet nearly out of control. In addition to lead man Brandon Welchez (vocals, guitar), The Crocodiles consist of Charles Rowell (guitar), Marco Gonzalez (bass), Anna Schulte (drums), and Robin Eisenberg (keyboards).

Here's "Sunday (Psychic Conversation No. 9)", my favorite track on the album. I really like the pace of this song and the vocal harmonies.


And here's a nice acoustic version of "Electric Death Song" that really points up their way with guitar chords and vocal harmonies:

The record's on Frenchkiss Records and available starting tomorrow - June 5. If you like rock music, you're gonna want it.