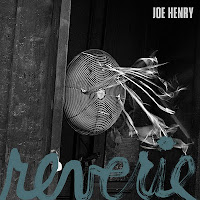 Joe Henry's a blues singer. He's a real good blues singer with an old soul, a great rhythmic sense and a terrific group of co-conspirators on each and every album. Joe is so consistent, folks may be forgiven for taking him for granted from time to time... but don't make that mistake here. Give a listen to Reverie and marvel at the breadth and strength of one of America's very best songwriters, producers and, oh yes, blues singers.

It starts off slow and sad, with a beautiful piano line on "Heaven's Escape". Henry's voice comes in slowly, and starts to take over as Keefus Ciancia's piano majestically, slowly, ushers the song along. Joe talks like a would-be big shot: "I deserve a much better hotel room than this" - and the irony is, based on his body of work and the quality of his records, he is a big deal but ought to be bigger.

"Odetta", song two, is a big acoustic song reminiscent, to me, of something from Dylan's Rolling Thunder Revue period... of course, Henry's worked with T-Bone Burnett and they are in a very real sense, kindred spirits, so that shouldn't be a surprise. About :30 from the end of the song comes Ciancia's piano again, rolling so it would do McCoy Tyner proud, and moving us out of this song and into a wistful "After the War". Delicate piano and plucked acoustic guitar and bass give this one the kind of sadness that makes us revel in our reminiscences.

Here's a trailer to give you the sense of the album... The song here is "Odetta":

There's jazz here: check out "Grand Street", plenty of syncopation and improvisation and that nearly-out-of-control sense you'll recognize from the great American jazz canon. And there's blues here: "Dark Tears" is directly linked to Skip James, Son House, and any of the great acoustic blues players both in spirit and approach. But more than that there's the kind of ragged acoustic rock music that informs 21st century masterpieces like Gillian Welch's Time the Revelator, Tom Waits' Blood Money and Bob Dylan's Time Out of Mind. I understand what type of company that puts Henry's work in... it is my intention to do so.

Reverie was released October 11, and you ought to be able to find it at your local record store. Or check it out at Anti- Records Website

And just because Henry speaks and writes so well, I'll close this with some of his thoughts on the record. It's rare indeed that a rock musician is both willing and able to give you some coherent thoughts that illuminate the work he has committed to record... but if anyone could, it'd be Joe Henry:

This album speaks about time, the great river that reminds us we are buoyant after all, as its moving current lifts us by the chin and just off of the balls of our feet, while we strain to dig our toes into the sandy ground. I am not convinced that any song exists without some knowing nod in its direction. And so with Reverie I am nodding, then –to time, but also to all the love, hope, despair, and revelation that stands naked inside its weather.

Just beautiful... both the thoughts and the record. If you'd like to read more of his writing (which I recommend), go to his website and click on the "Journal" tab at the top:

JoeHenryLovesYouMadly.com
Posted by John Hyland at 10/28/2011

It's a great record, one's of Joe's best ever, which is saying a whole lot.

I'll endorse it as well. As we know, I'm not as deeply into the singer songwriter genre, but good is good. And this album is good.